Pro-Life Democrats to Democratic Leadership: You Cannot Win When you Alienate 21 Million People in your Base

“The National Democrat message to support abortion destroys Democratic candidates in pro-life states and districts by pushing pro-life democrats out of the party,” said Kristen Day, Executive Director of Democrats for Life. “A large majority of Democrats support reasonable restrictions on abortion. We are alienating a whole new generation of pro-life Democrats.”

“In pro-life states and districts, Democrats, and particularly pro-life women, have a hard time pulling the lever for a candidate who is associated with a Party that not only supports abortion but actively campaigns against providing any reasonable restrictions on a ‘medical procedure’ that takes a life,” said Day. “Pro-life Democrats believe that life exists in the womb. Until the Democratic leadership accepts and respects that point of view, the Party will not heal and not win.”

The pro-life vote can provide enough of a swing in certain districts and states to turn blue districts red:

Since 1980, a strong correlation has existed between the loss of pro-life Democrats and the loss of the majority status of the Democratic Party. (See Chart.) The number of pro-choice Democrats has stayed roughly the same; the party’s losses have been in pro-life members, who have been claimed by the Republicans.

“We are once again hopeful the national Party elites will reassess their pro-abortion stance after the disastrous results of Tuesday night,” said Day.  “They are costing us elections and abandoning our founding values of protecting and advocating for those who need a helping hand.  At the top of that list should be helping protect the rights of the unborn.” 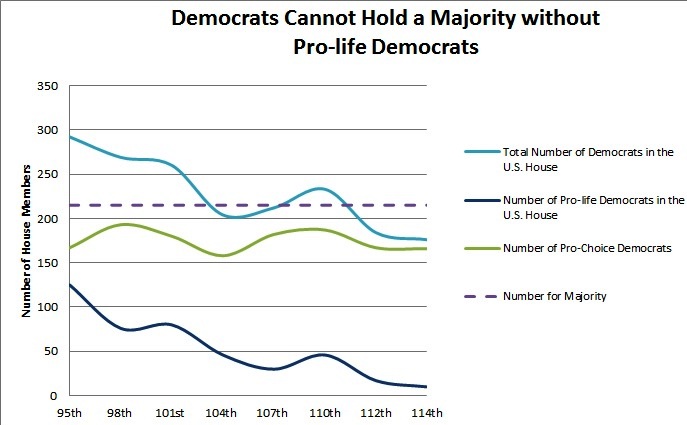